Ice Pilots: Flying in the Winter 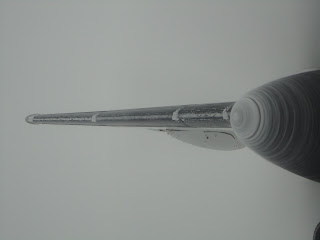 Before flying for the airlines, I was a pansy when it came to ice.  My first experience with ice was over Ohio in a Cessna 172.  It wasn't anything major, but while traversing across the country, I went through some clouds that instantly froze on my airplane.  I'll never forget looking down on my left wheel and seeing the whole front of the tire changed to white.  I vowed to not do that again!

I admittedly hated ice and airplanes.

My second experience involved a Cessna 172 yet again.  This time I was flying low over Louisiana.  The clouds were very low, and the mist from them occasionally hung down.  But I was flying around 1000 feet above the ground and watched as the fronts of my wings turned a little bit different color than the paint.  What was most interesting about this one was that I actually thought I was staying out of the clouds!  I vowed not to do that again!

I admittedly hated ice and airplanes.

I continually try to learn more and more as a pilot.  One of my hobbies is reading NTSB reports about pilots who have crashed or almost crashed.  I ask myself how they arrived in the situation they did.  I also take online classses fairly regularly to stay fresh in various aspects of flying.  One of the classes I took was about icing.  Basically, it highlighted the various dangers of what ice can do to an airplane...and also how to fly through icing conditions.  Certain aircraft (all airlines) are certified to fly through icing conditions, and it's a combination of training, experience, knowledge, mechanics, and intuition to fly safely.

Case and point:  It's now late February.  Truth be told, this winter has been one of the weakest on record.  I have seen snow a number of times, but each and every time, the snow disappears within a few days.  Either by sun or rain in the days immediately following.  But what I have also seen is ice.  I've seen freezing rain, drizzle, freezing fog, light snow, blowing snow, heavy snow, you name it.  It's quite the learning curve really.  I would NEVER fly through what I fly through now in my previous airplanes.  Frankly, I couldn't!  I really had no adequate ice protection (outside of pitot heat and carb heat).

But in just a few short months, in one of the mildest winters on record, I've had some experiences that other pilots will never see!  Ice.  Lots and lots of ice.  Frankly, sometimes you just can't get out of it.  We fly low and slow in the northeast.  In the winter.  In the soup.  On our routes, sometimes we just don't have the ability or time to jump to different altitudes.  We just fly and let the airplane shed the ice.

I was jump-seating on an ExpressJet flight (now AC) last month, and the female Captain asked me what we did if we ever encounter a freezing layer.  Here she was, flying a very powerful and very fast regional jet, and she was curious what a prop pilot did if found to be in icing conditions.

I sat there and rather nonchalantly said, "We fly." 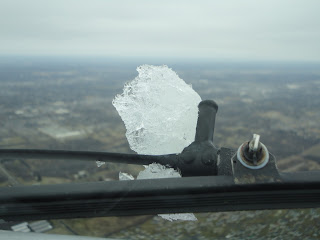 But that's just it.  We fly.  It's kind of hard to explain.  I don't revel in the fact that I fly through icing conditions again and again.  But I don't shy away from it, either.  I have an FAA-certified airplane capable and allowed to fly through ice.  We pilots don't take our job lightly, and we monitor the ice situation rather keenly.  But we fly.  Contrary to jets, we don't climb out of it.  And we can't always descend out of it.  We fly.  It's all we can do.  We just simply fly. 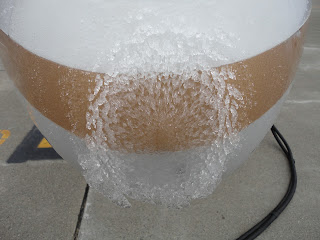 I showed a picture of some of the ice I've encountered to a mainline 737 Captain, and he responded by saying, "Boots are for cowboys, props are for boats."  ha!  But I'm learning that is more and more the case.  Jet guys often just don't feel comfortable in icing conditions.  It's not that they couldn't fly...it's just that they don't have to.  So because of that, they assume that it's "bad."

The View From My Office

Runway in Sight
The Polley's trace their heritage from Illinois back to Kentucky, then back to Germany, Ireland, and England. Most of our generation resides within central Illinois.

The Weather Up There