Woke up at 8:00 A.M.  Grabbed a bowl of cereal, then headed outside.  Didn't even get ready for anything else!  I mowed the front yard...which had areas of 8-inch tall grass!  It needed it badly.  I then became ambitious and pulled out the power washer and started on my deck.

Frankly, I was nothing short of shocked to see just how well it made my wood go from old and brown to fairly new-looking!!!  It was seriously making it look sharp!  I spent a couple of hours on it, but I really wasn't getting anywhere.  I was probably only 1/4 of the way done.  Knowing that I may have an 8-hour job in front of me, I opted to NOT pursue that any further!!!  I took a break, came in, showered, and brushed my teeth.  It was about 10:45. 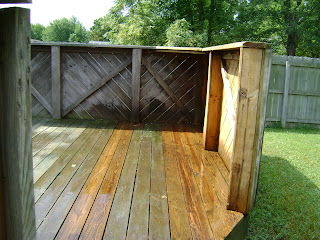 It was warming up quickly, but I went ahead and tried out one of the gallons of stain from my purchase a week or so ago.  Hmm.  It wasn't the brown I had anticipated.  It was more clear!  I tried it on an old piece of wood and a power-washed piece.  The difference was night and day.  I knew right then and there that I would have to complete what I started.  I had numerous hours of power-washing ahead of me.  Ruh roh.

I headed to McDonald's for lunch...a couple of hamburgers and a sweet tea with a nice refill!  Then I came back and continued the job.  Another couple of hours.  I'll be honest, the deck WAS starting to look nice!  It's really making the wood look like new!  But I have to literally cover EVERY square-inch with that wand, and that is just no easy task!  I pressed on. 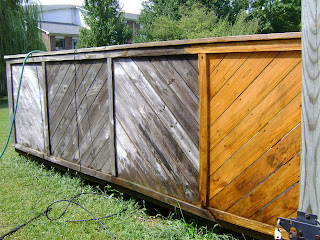 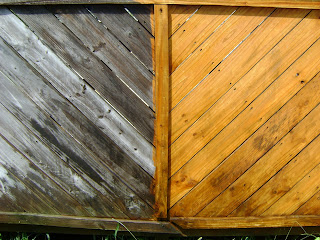 I took a break in the mid-afternoon...when it was 108 degrees.  I took too long of a break, though, and really didn't want to go back out!  But I forced myself to do it.  And I added another couple of hours in the early evening.  Mom and Dad came over, and I pulled the ol' Tom Sawyer move on them...each of them did a few boards.  But I was eager to call it a day...I still have a few hours left to do before I can stain it. 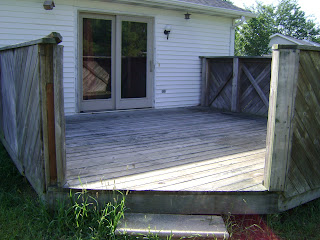 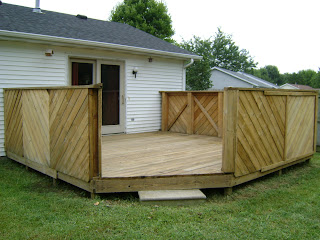 Talked with Mom and Dad for a bit...enjoyed a nice McDonald's frap around 8:30.  They headed home, and I stayed inside the rest of the night.  Talked to Whit for a short bit...she was out line-dancin' with her girls.

Ended up going to bed around midnight.
Posted by Runway in Sight at 11:29 PM

The View From My Office

Runway in Sight
The Polley's trace their heritage from Illinois back to Kentucky, then back to Germany, Ireland, and England. Most of our generation resides within central Illinois.

The Weather Up There